The large seal on the right of the banner is that of Enguerrand de Coucy , perhaps one of the most well-known resident aliens in England in the late fourteenth century.

Coucy’s seal is attached to a document dated 1367, granting him the reversion of all manors and lands held for life by Joan late the wife of John de Coupeland (TNA E 42/257). 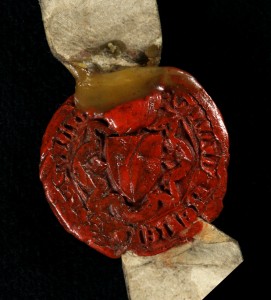 The smaller seal is that of the Italian merchant Benedict Zakarie.  He originated from Genoa, but chose to settle permanently in London.

Zakarie’s seal is attached to a receipt for 499 marks from the Treasury in part payment of Edward III’s debt to him for goods supplied.  (TNA E 43/744)

The text in the banner of the website is an example of an alien tax assessment.  This one was taken in Buckinghamshire for the subsidy granted in 1440.

All images are Crown copyright.  Many thanks to Hugh Alexander of The National Archive’s Image Library for his photography.